Home
BFW Blog
After you unwrap a DRONE, something to ponder?

After you unwrap a DRONE, something to ponder?

The next wave of hobby drones will be wrapped in boxes underneath Christmas trees before they fill the skies. If industry sales projections come true, the holiday season will put tens of thousands of relative novices at the controls of small unmanned aerial vehicles in densely populated cities and suburbs. All that amateurish swooping over houses and cars, spooking pets and dodging humans, will invariably lead to cracked windows and more than a few bloody injuries.

“Almost no one is thinking about insurance coverage when they’re opening the box,” says Jeff Antonelli, a Chicago attorney who specializes in federal regulations for unmanned aerial systems. The liability protection in homeowners or renters insurance policies will sometimes cover damage or injury from a drone crashing into a neighbor’s house, vehicle, or child. Yet this coverage isn’t universal, Antonelli says, and some policies specifically carry an aviation exclusion that encompasses recreational drones, which the Federal Aviation Administration currently classifies as small aircraft. 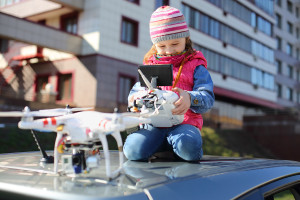