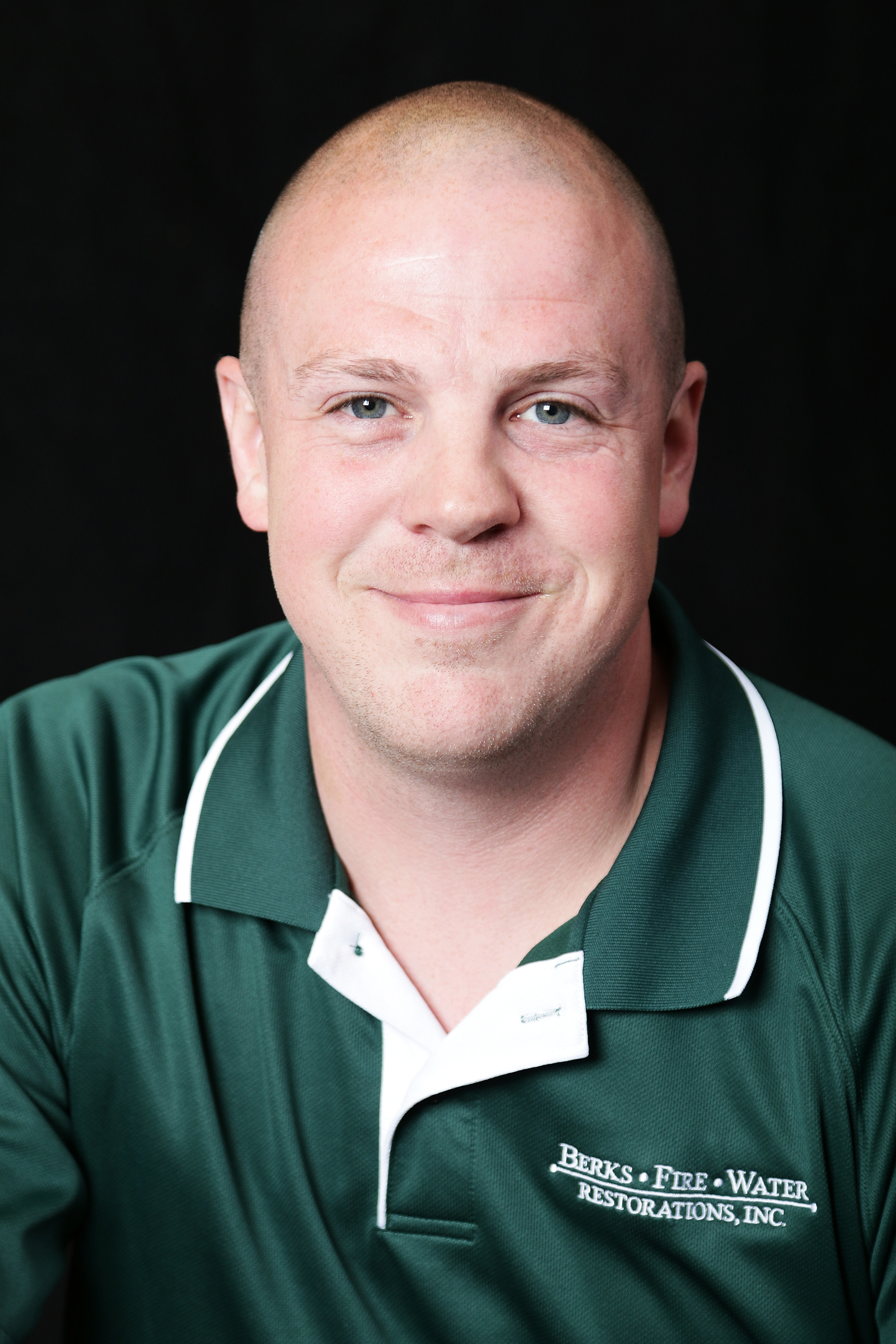 Signs you know someone’s been with a company for quite some time: They start counting the years (on more than one hand) until finally saying, with some hesitation, “17 years.” This is what happened when I asked Chad Moyer how long he has worked at Berks • Fire • Water Restorations. A pause of silence filled the room as Chad looked a bit skeptical. He broke the silence with an inquisitive “…I think?” and we both laughed.

So what first brought Chad, who has been a Project Manager here for the past 4 years, to Berks • Fire • Water Restorations? According to Chad he had worked elsewhere on a production line, but doing the same thing for eight hours wasn’t for him, so he found BFW. Lisa Lavender, COO, remembers her first impression of him as a “sweet, young kid who just graduated from Fleetwood High School. He had a big smile and turned red really easily.” Now he keeps plenty busy throughout the day doing many different tasks, from “meeting with customers, to going out in the field to manage jobs and writing estimates.”

Chad has grown and excelled here since first starting out as a restoration technician. Aside from receiving his IICRC Master Fire and Smoke Restorers Certification in August of 2009, Chad believes that working at BFW has allowed him to grow on a professional and personal level. “Working here has allowed me to interact and meet many new people to grow relationships with,” he explains. Chad has also grown lifelong relationships with his co-workers. One in particular that stands out is Team Leader, Barry Hall. Chad’s best memory at BFW is “anything that involves fellow employee, Barry. We have worked together for over 10 years, and we have had a lot of good times together.”

Signs you know someone has a lot of funny memories and good times with a person: They start laughing the instant you say their name. This is what happened when I brought up Chad’s name to Barry. Of all the funny stories and inside jokes that he rattled off, Barry’s favorite memory with Chad was when they “were at a loss together and saw these two guys arguing and bickering nonstop.” Barry recalls asking the two men if they were going to throw fists, to which Chad replied right away with, “No they are just an older version of us.” Despite Chad and Barry’s friendly banter, they always have one another’s backs. As Barry summed up, “Chad can talk me into doing anything to help him out on a loss.” Aside from the bonds he has formed with his co-workers, Chad also just loves the work he does. His favorite part of his job is “helping people get back in their homes after an unfortunate event.” He concludes, “It’s just nice to get people back to normalcy.”

When Chad isn’t working you can likely find him at the Fleetwood Volunteer Fire Company where he is the Assistant Fire Chief. He also enjoys hunting, shooting and farming because they keep him active and outside. His favorite place to enjoy these hobbies are in the mountains of Sullivan County.