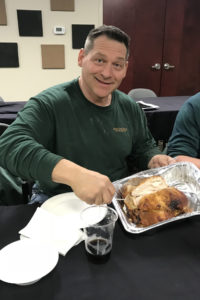 Rit enjoying his chicken, specially made for him by Ted Lavender, BFW CEO, at the annual production dinner hosted by Ted and Lisa.

Richard is likely not a name you are used to hearing around Berks • Fire • Water Restorations, but mention the name “Rit” or “Boom Done” and the BFW family will know just who you are talking about. Known as Rit because, as he says, “he is not Rich yet” and known as Boom Done ever since a client called him that a long time ago, he has worked at BFW for so long that he can’t remember how many years it has been.

Rit has been a Team Leader for five of the nearly 13 years that he has worked here. With six people on his team, he explains that he “trains his guys instead of just leading them.” The respect that he has gained from his team members is easily visible – and understandably so. One of his newest team members, Josh Rothermel, who began working at BFW this past November just signed a lease for his first apartment last month, an action that he credits to Rit for motivating him to pursue his goals.“He just took me under his wing after I started and has taught me everything. He’s more like a father figure or older brother to me,” Josh says proudly of Rit. Rit speaks just as fondly of Josh, without hesitating to show off a photo of him dressed in his Marine uniform like the proud father Josh makes him out to be.

Although Rit is known for getting the job done wherever needed, from volunteering to repaint the floor in production before our annual open house to repairing the toilet over at the flood house, he says that his expertise falls in electrical and mechanical work. He has been doing this kind of work since he was 15, as his family members did it, too.

Rit enjoys his work at BFW – even those jobs that require a bit of elbow grease and sweat.“None of the jobs are hard.They are only as hard as you make them,” he says with a smile. “The harder the job, the greater the reward. I get reward from my work.” He describes BFW as “the only place where you learn something new, exercise, and get paid for it.” His favorite BFW memory is working on the construction of our current building with Ted’s father, or “Dennis the Menace” as Rit likes to call him.

When Rit is not at work he enjoys restoring antique cars. His most prized possession is his 1962 Impala that he completely restored himself. Rit also restores cars for others. He recently remodeled one for free as a favor to a military veteran who didn’t have much money. His favorite part of this hobby of his is when he “restores people’s cars and they cry after seeing it.” Rit also enjoys camping in his motor home, going on roller coasters and spending time with his six-year-old boxer, who he refers to as his daughter.

As Rit would say – Boom Done.