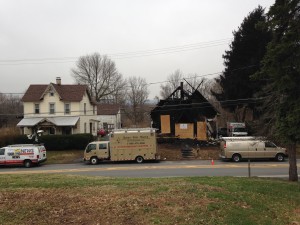 Fire crews responded to the two-alarm blaze in the 600 block of Monocacy Creek Road shortly before 2 p.m.

“The very front of the building was pretty well-involved, and flames were leaping up even higher than the top of the building, by about 15 or 20 feet,” said neighbor Eric Ressler.

Authorities said no one was inside when the fire started. No injuries were reported, but firefighters were initially concerned about power line dangers.

“They were cracking, flashing, like mini lightening bolts,” said Lt. A. Ruffner, Monarch Fire Company. “Obviously, that’s dangerous for us because it’s high voltage lines above our heads, so at that time we had to pull back.”

Power was shut off and remained down on the block as this report was published. Fire crews proceeded to battle the blaze.

Neighbors told 69 News that one man lived inside the home. Several had reportedly observed him leave the residence around noon.

The home, nearly a century-old, was once a church, according to neighbors. Now, it is a total loss.

“It’s a very old building, and it’s a shame to see it burn,” said Ressler.

Authorities said they believe the blaze started toward the front of the house. A state police fire marshal is searching for the cause. At this point, officials have not ruled out whether the fire is suspicious.