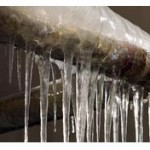 It’s becoming increasingly likely that this will be the region’s coldest February in 36 years.And the cold is taking its toll; reports of frozen water pipes, dead batteries and overworked fuel oil delivery people are pouring in from across Berks.The coldest average temperature for February in Berks County was 20.5 degrees in 1979.

Through Thursday, the average for February is about 21.5 degrees.AccuWeather says tonight could be the coldest yet, with the low predicted to be a bone-chilling minus 1.

Lisa Lavender, chief operating officer for Berks Fire Water Restorations, Inc., said the company is telling customers to turn their thermostats up to protect pipes from freezing.”With the wind being so strong and the temperatures so low, a house doesn’t have a chance,” she said.Cheryl Harting, a project coordinator for Berks Fire Water Restorations, said she hasn’t been this busy in years.”We’re seeing pipe breaks in ceilings, garages and basements,” Harting said. “You don’t want to have a house that isn’t breathing, but with temperatures this cold for this length of time, it’s bad.”One couple, John and Mildred Nawa of Mohnton, were on an annual vacation in Florida this week when a relative discovered that a pipe in the Nawas’ basement ceiling was leaking. A Berks Fire Water Restoration crew was called to clean up the water and dry the basement, but not before family photos and other heirlooms were damaged.”This is my wife’s whole life in those boxes and albums,” John Nawa said. –