How to prepare your pets for a natural disaster 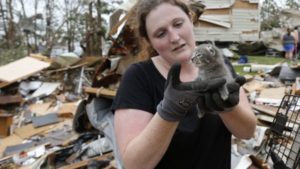 Maeghan Hadley, of 1Day Ranch pet rescue, checks over a kitten pulled from under the rubble of a mobile home destroyed by a tornado in the Steelman Estates Mobile Home Park, near Shawnee, Okla., on May 20, 2013. Following the rescue, an outpouring of love for the kitten came from all over the world, with some people even asking if the kitten could be shipped abroad. (Photo: Sue Ogrocki/AP Photo)

Many pets become lost or separated from their families during storms or other disasters.

The U.S. Department of Homeland Security and the Federal Emergency Management Agency, sponsors of Ready.gov, want you to include your cat, dog or other animals in your disaster preparedness plans.

During Hurricane Katrina in 2005, tens of thousand of animals were left behind to fend for themselves because no provision had been make for the evacuation of pets along with families. One survey conducted after Katrina found that 44% of those who chose to ride out the storm did so because they could not evacuate with their animals, according to CNN.

The Louisiana Society for the Prevention of Cruelty to Animals estimates that as many as 104,000 pets remained in New Orleans during the storm. Of those, about 15,500 were rescued but only about 15% to 20% of the rescued animals were reunited with their owners. At least 88,700 pets were unaccounted for. Most estimates put the number of animals who died during Katrina between 50,000 and 70,000 across the entire Gulf Coast.

In 2006, Congress passed the Pet Evacuation and Transportation Standards Act, which required local jurisdictions to have a pet evacuation plan in place to qualify for FEMA funding in the event of a disaster. The PETS Act has saved countless animal lives in subsequent disasters and reflects the public understanding that pets are indeed a part of the family.

The Humane Society of the United States reminds us, “If you are told to evacuate, leave immediately and take your animals. If it’s not safe for you, it’s not for them.”

Click How to prepare your pets for a natural disaster to read the entire article.

Click Get prepared with the [first dogs] Bo and Sunny to watch a short video from FEMA and the White House with an important message regarding keeping your beloved pets safe in the event of a natural disaster or emergency.