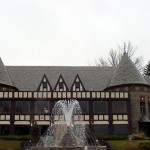 It was a race to stay afloat at the Reading County Club in Exeter Township, Berks County.

The Exeter Township Fire Dept. rushed to the scene for the second time in the same day.

“So we have people in position so when they fill the sprinkler system, if they see another leak, we can shut it off right away,” said Deputy Chief Eric Lessig.

Just hours earlier, first responders rushed to the country club after the second floor ceiling tiles collapsed due to a burst pipe that feeds the sprinkler system, officials said.

Viewer video sent in to 69 News captured water raining down in the ballroom, soaking a baby grand piano.

“It is absolutely devastating. What just happened here was a whole other incident with another pipe,” said Jessica Prutzman, Berks Fire Water Restoration.

And now the pressure is on to get things in tip top condition for a weekend of big events.

Management says they will be ready.

“Yes, absolutely. We’re going to be all cleaned up and ready for business,” said Jeffery Stauss.

Reading County Club officials say they expect the facility to be closed for one day to complete repairs.