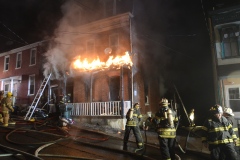 Seven people are displaced after an early morning house fire at 622 N. Second St. in Pottsville.

“It was blowing out of the front,” Pottsville Assistant Fire Chief Steve Karinch said of the fire, which was contained in about 90 minutes.

The cause of the fire is under investigation, Karinch said. He and two fire investigators, Mike Stank and Joe Murton VI, were going to investigate the fire. He does not know if the building is a total loss but there is significant damage. The fire was throughout the entire building, he said. A damage estimate was not available. As of yet, he had not checked for working smoke detectors in the building.  The owners of the house, are John and Janet McMahon, according to the Online Schuylkill County Parcel Locator. Karinch said the house is insured.

Cari Collins, 23, her brother, Gurney Bixler Jr.,20, their mother, Amy Kane, 41, Kane’s other daughter, Arlene Kane, 14, and friends, Eric Lamberth, 23, and Lamberth’s girlfriend, Elisa Brenan, 22, and a friend Joe Ditzel, 35, all lived at the house. None were injured. Ditzel and Amy and Arlene Kane were not at home at the time of the fire.

Collins said she was downstairs and went to the second floor for a few minutes. When she went back downstairs, she said she smelled smoke. She tried to find where the smoke was coming from and when she opened the door to the living room on the first floor, she saw flames and shut the door. She yelled upstairs to the other residents about the fire.

Some pets were unaccounted for, while the two dogs were found, one resident said. However, Amy Kane said she thought the one smaller dog, a black and white dog was missing. She said she also didn’t know if the two cats, a bunny and a ferret survived.