On November 2, 2014 we had a fire in our home at 605 Frederick St., Sinking Spring. The fire was more than likely started by our yellow lab jumping up on the counter to look for food.  He inadvertently ignited the gas burner on the stove.  Fortunately, we were not home but we were an hour and half away visiting family when we found out what happened and thus began our devastating journey.  Words can’t express what it was like to pull up to our house and know our beloved Rudy did not make it…and most of our things and memories were lost as well.

Being in a state of shock and grief our brother in law called Berks Fire Water Restorations because we were told we needed to have everything boarded up.  Brad showed up on the scene shortly after with his team.  He was able to give us the information we needed and what the next steps would be.

I could sit here and write pages but what quickly became the most difficult time in our lives was made slightly “easier” knowing we were in good hands.

Click to read the entire letter from the Samolewicz family. 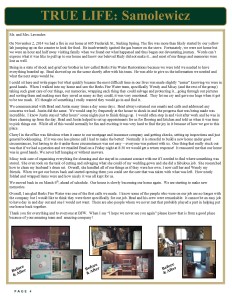