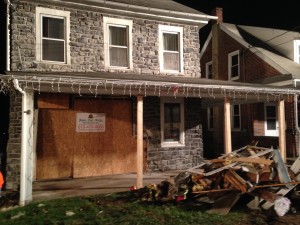 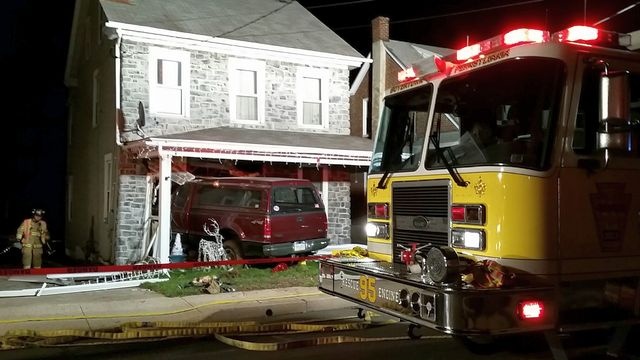 Berks Fire Water Restorations was called to the scene of a vehicle impact last night outside Boyertown to perform emergency restoration services to stabilize and secure the property.

From WFMZ:  Rescue crews worked for hours on the scene of a wild crash in Colebrookdale Township in Berks County. People on the 600 block of North Reading Avenue were in shock to see a pickup truck halfway into the home of one of their neighbors. The crash happened shortly after 6 p.m Wednesday. “We thought there was a fire or something going on,” said Stacey Hart, who lives on the block same where the accident occured. “We didn’t realize that a car had actually went into somebody’s home.” “From talking to the police it appears that the driver was moving over for a tractor trailer traveling on Reading Avenue,” said Jeff Bealer, the Public Information Officer for Boyertown Fire and Rescue. “He caught the grate up there and he lost control and that’s how he went off the road.” The driver first went over Rachel Murphy’s front yard knocking down the family’s Christmas decorations. “Our front yard is all torn up but I feel so bad for the next door neighbors,” Murphy told 69 News. “[The] truck is just completely in their house.” Authorities said a man in his fifties inside the house was hurt. He was transported by ambulance to Lehigh Valley Hospital. “I believe he was hit with debris,” said Bealer. “I’m not positive, but [his injuries] had to do with the crash.” Bealer said other people were in the home but they were not injured. “I feel terrible for them,” added Murphy. “Especially, it’s so close to Christmas. It’s terrible.” The driver of the truck was not hurt and stayed on the scene. Police have not said whether he will face any charges.